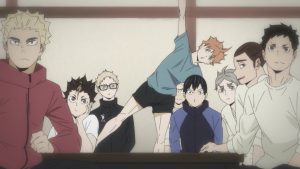 Either the production values were better in this week’s edition of “To The Top”, or my standards have been lowered to the point where I can’t discern the difference (which I doubt).  Normally I don’t think that kind of thing is paramount, but as I noted last week art and animation seems to be a huge part of Haikyuu’s appeal.  Whether that was the reason or not this was the snappiest episode for a while.  It felt more like “vintage” Haikyuu somehow, which definitely marked a welcome change. 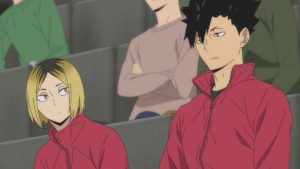 I’m still not that sold on Inarizaka as an opponent in truth.  But if you’re going to focus on them the Miya twins are at least the most engaging of that lot.  It was nice to see Osamu’s importance to the Inarizaka dynamic explored in detail at last.  The focus has been almost entirely on his brother – which I think is exactly the point.  In sports, it tends not to matter where you get your motivation from as long as you get it.  And while one might argue Atsumu’s isn’t the healthiest in nature, it does serve to compel him to excel. 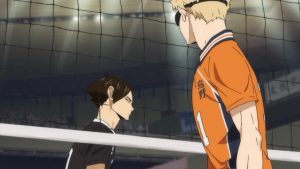 There was some good volleyball minutiae here too, always appreciated by someone like me who doesn’t grok the subtleties of the sport.  I like the idea of blocking at a 6 vs. 1 scenario.  That’s an oversimplification of course, but it is true in the literal sense.  Only one person is spiking the ball, and he’s contenting with the entire opposing defense.  It’s a useful way of framing the strategy involved, as we see demonstrated quite clearly here.  Use the other guys on your side of the net – that’s what they’re there for. 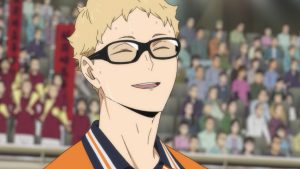 The whole notion of underhand vs. overhand is applied in a couple of interesting ways too.  For Yuu it’s a matter of how he receives.  He could always fall back on the easier underhand receives, but he likes to challenge himself – though he’s forgotten that in the heat of the moment.  It’s Kinoshita – who’s just failed to score in his cameo as a pinch-server – who reminds him when he’s receiving an Atsumu floater.  For Atsumu it comes into play when he performs an amazing physical feat to set up Osamu overhanded on a difficult ball.  “Ten fingers vs. two hands” is a good illustration of the setter’s mentality I suppose. 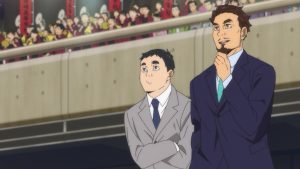 I do agree with Atsumu, setter is the coolest position in volleyball. The truth of these brothers is rather stark, and Osamu is self-aware enough to realize it.  He’s just as talented at Atsumu but he just doesn’t care as much.  Call it crazy, call it love of the game, whatever.  The bottom line is, his drive simply isn’t on the same level as his brother’s.  That frustrates him, because the one thing that seems to drive him the hardest is trying not to let Atsumu overshadow him.  But that frustration is never quite enough to get him to the same level.  Sibling relationships are tough to begin with – for a twin, the existential brutality is really cranked up to eleven.