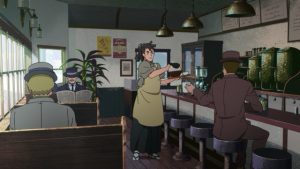 If pressed, I suppose I would bundle Appare-Ranman with “Millionaire Detective”, and in more ways than one.  Both are shows that would probably be lost in the shuffle of even an average anime season, but in this one they’re practically standouts.  I don’t know that I’d normally still be considering covering either one (especially “Appare”, as it’s almost half-over), but here we are.  Both are trading on more or less the same appeal, too – over-the-top silliness and unapologetically ludicrous plotting that kind of works. 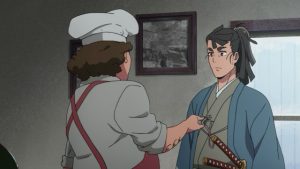 I noted last week that “over-the-top and silly are areas of relative strength, and that’s what will be needed for the great race”, and Appare-Ranman didn’t let me down.  It’s obviously adopting the “go big or go home” mantra, adding big-name seiyuu like Namikawa Daisuke, Sugita Tomokazu and  Ono Daisuke in cartoony supporting roles and opening the race with an impromptu pole qualifying contest that’s a total free for all.  Namikawa is the prissy race director and Daisuke the evil “Gil T. Cigar”, but the king of preposterousness has to be Sugita’s TJ.  He barges in to the pre-race dinner dressed like a New York pimp blasting hip hop from a boombox victrola.  Go big or go home indeed… 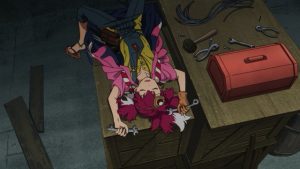 Setting aside the matter of whether caricatures like TJ and Hototo are racially insensitive – and maybe they’re so far removed from realism that they manage to dodge that bear trap to an extent – they do sort of work as narrative devices.  Hototo is especially key to Appare-Ranman’s prospects I think, because he’s the most sensible and level-headed (about most things, anyway) of the main cast, and he has the most relatable agenda – avenging his family.  I think it was pretty much a given that Hototo was going to fill the navigator role – it’s the natural slot for bozu in stories like this one – and indeed, that’s the role Appare decides to deploy him in for the great race. 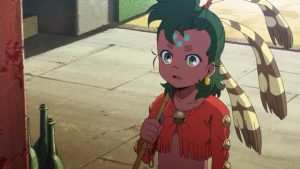 The great race itself promises to be interesting because, as I noted, it seems to play into Appare-Ranman’s strengths.  Above and beyond the various oddballs contesting it there seems to be a plot afoot to sabotage it from within and have it “end in tragedy” (my early money says the railroads are behind it).  And of course we’re going to see the series take on turn of the 20th-Century America beyond L.A., which promises to be just as hilariously inaccurate and anachronistic.  Like Fugou Keiji this is an utterly absurd but – so far at least – respectably entertaining show.